What Is the Biggest Challenge to L&D Career Advancement in the UK?

Our survey found that respondents seem happy with their current position as 46% do not want to change their job. However, for those who want to advance in their career, lack of opportunities seems to be the main barrier to progression.

The highest percentage of respondents (21%) are not finding opportunities to progress, followed by 9% who said age was the biggest challenge for them. The third barrier (6%) was lack of experience/qualifications. 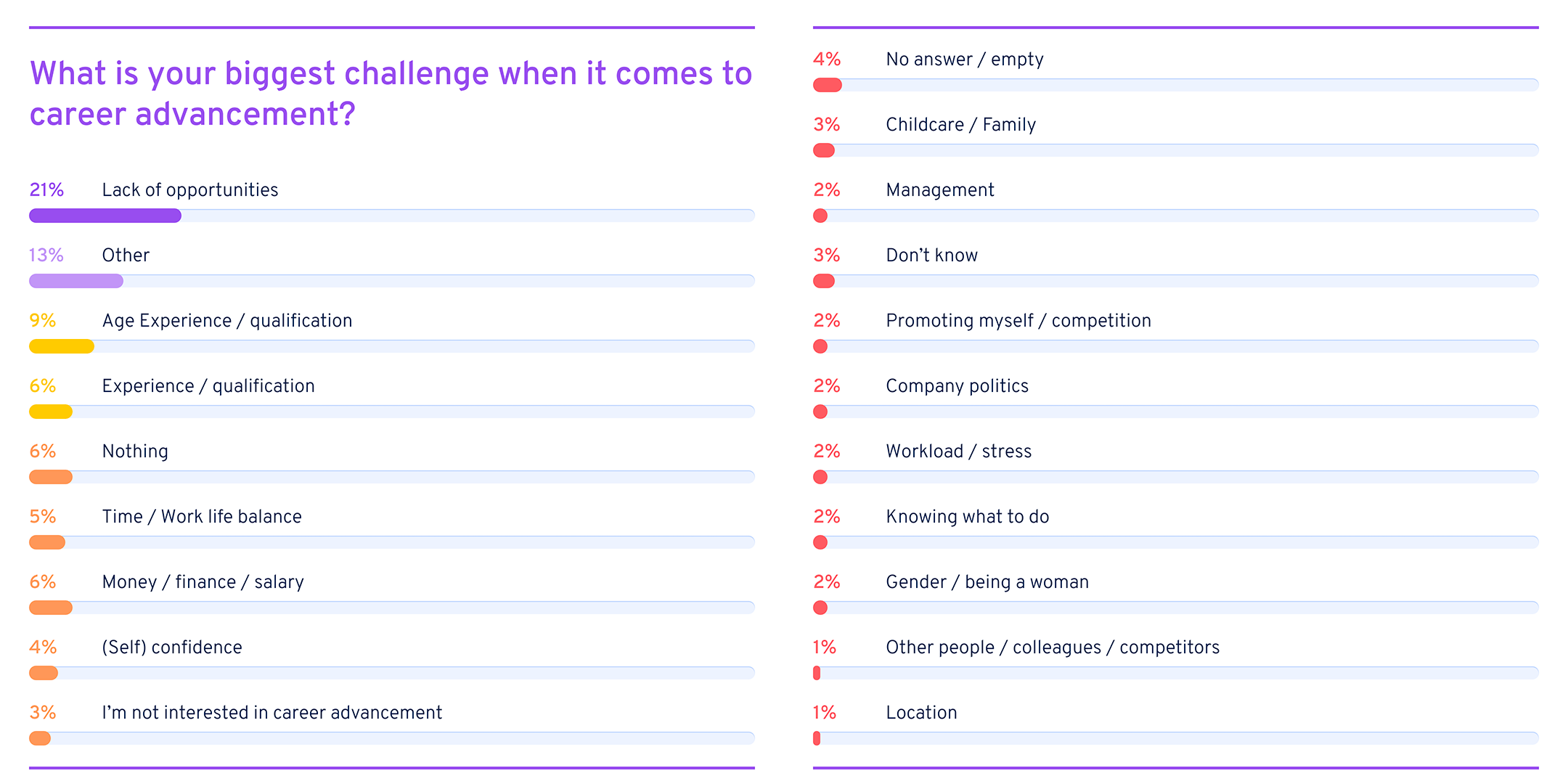 This tells us there are a lot of talented and ambitious L&D professionals out there who aren’t benefitting from the right opportunities to grow and step into new roles. This is something organisational leadership needs to take seriously, as it could lead to higher rates of churn amongst valuable staff.

We surveyed 600 learners. This is what they said.

Do men and women face different challenges when it comes to career progression?

While lack of opportunities and age were the top two challenges for both men and women, the other reasons given by our respondents varied significantly. Men were more likely to say nothing was stopping them from advancing (7%) vs only 5% of women reporting this. 7% of men found lack of experience/qualification to be an issue, followed by salary (5%).

For women, after lack of opportunities and age, women said time/work-life balance was a barrier to career advancement (8%) vs only 3% of men who said this. 6% of women said childcare/family responsibilities were also a barrier.

This trend is particularly concerning, as only 1% of men said childcare/family responsibilities were a hindrance factor. This is a sad fact and implies that women are still doing the majority of caregiving, either with children or with other dependents.

This is a real barrier to women’s careers because when they return to work after maternity leave or work part-time to juggle their work/family responsibilities, they’re up against men who in general have taken less time off, or who can work more hours in a given week.

Employers should be dedicated to overcoming this issue to the motherhood penalty by shrinking the gender pay gap (read more on this in this chapter), changing expectations and offering shared parental leave, and forming a company culture that supports working parents.

Only 1% of men said childcare/family responsibilities were a hindrance factor. This is a sad fact and implies that women are still doing the majority of caregiving, either with children or with other dependents.

Another concerning area is our respondents’ level of self-confidence in progressing one’s career. Our survey found that 7% of women reported self-confidence as a challenge, vs only 2% of men. This suggests that women do indeed underestimate their abilities and performance and are more likely to experience imposter syndrome, a term coined by psychologists Pauline Claunce and Suzanne Imes.

Employers need to focus on fixing the places where women work instead of fixing women at work. Managers can achieve this by pivoting the language employees use to describe themselves, being honest about the impact of bias, and recognising the complicated trends of gender discrimination at play in questions of career advancement, salary, and employment more broadly.

Organisations should also focus on understanding bias through data. “Always on” anonymous employee feedback surveys are a great way to gather information.

Is age a barrier to professional development in L&D?

Our survey found that age becomes a barrier to progression for respondents aged 45 and over. In another survey we conducted, we found that older workers were in fact quitting their jobs due to unfulfillment, making them the cohort largely responsible for the Great Resignation. This data suggests that older workers are being left behind when it comes to professional development and as a result, they are feeling unfulfilled.

To keep older employees engaged, employers should focus on working alongside them to leverage their existing subject-matter expertise, encouraging them to share their years of accumulated knowledge with their peers.

Employers should also ​​consider mentorship and coaching programmes. Pairing experienced workers with new hires is a great way to pass on institutional knowledge. It’s important for all employees to have someone ‘to look up to’ in their professional lives and get guidance and support. This strongly contributes to a positive work environment and a culture of learning.

To keep older employees engaged, employers should focus on working alongside them to  leverage their existing subject-matter expertise, encouraging them to share their years of accumulated knowledge with their peers.

How to get the L&D career you really want

So, what can we do as L&D professionals to advance our careers?

Often, we see self-made individuals who accomplish their career goals through their own hard work and determination. While that is true to a certain extent, the reality is that people need business leaders to look up to who will provide long-term support on people’s career paths. That’s why coaching and mentoring have been proven to help people navigate professional development opportunities more successfully.

Mentors help people build their professional networks, connect people with leaders, and act as positive role models for people just starting out. For mentees, they’re also an excellent sounding board for new ideas or new challenges faced. Importantly, they can also provide advice on how to navigate salary conversations towards a positive outcome for both the employee and the employer. 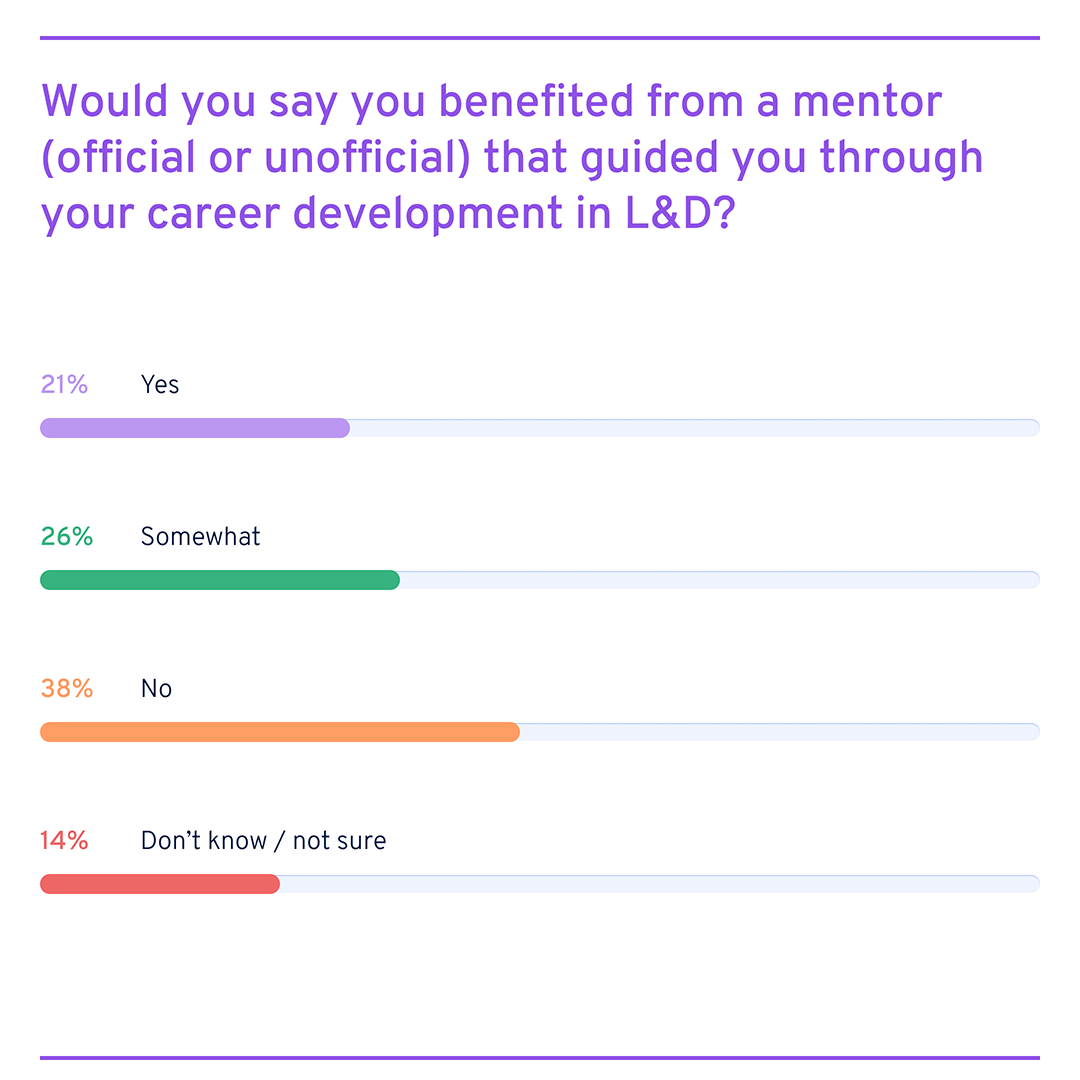 38% of respondents said they haven’t benefited from a mentor (official or unofficial) to guide them through their career development in L&D.

When we researched the link between salary satisfaction and whether people had benefited from a mentor, we found some interesting results. 59% of respondents who were satisfied with their salary did benefit from a mentor. So, reach out to someone that has inspired you and set up a meeting–it could make a big difference!

Shift your L&D focus to proving performance, not just engagement

As we mentioned at the beginning of this report, many L&D teams have struggled to prove their value to the rest of the business, whether that be due to organisational structure or lack of progress made towards leveraging technology. This means that L&D departments are usually monitoring engagement metrics such as course completion rates or participation instead of focusing on performance.

This may seem like a complex problem to solve, but it doesn’t have to be. Check out David James Pivot to Performance podcast series, our L&D masterclass series, and join The L&D Collective to get tips on turning L&D departments around and proving their team's worth, something which is essential to progressing your own career.

Continue reading the UK L&D Salary Benchmark report where we dive into why nearly a quarter of our survey respondents want to leave L&D!

Ready to join your peers in the L&D Collective?

Good timing—we’re currently accepting new members. Apply today to join the industry’s best and brightest in the L&D Collective. (Membership is free but reserved for L&D professionals only.)