Here’s a worrying fact: it takes 197 hours on average to create a single hour of SCORM-based eLearning. That’s a week and change of round-the-clock work, all for a measly hour of content.

It’s almost as if SCORM was intentionally built to make it impossible for anyone other than certified instructional designers to operate, just to keep us hooked on old technology forever.

We wanted to get to the bottom of the SCORM paradox, so we asked the experts. Why are so many L&D teams still relying on technology that’s nearly two decades old? And how can we help people to find a better way to deliver the learning experiences people really want?

Here’s what they had to say.

Want to know more about how SCORM is slowing us down? Check out our ebook.

SCORM is dead. The future of eLearning is here.

John Leh: ‘SCORM is ubiquitous in the industry’

First, a little background: SCORM (or Shareable Content Object Reference Model) is a set of technical standards supporting online training. It makes it possible to create and share learning content, or to purchase third-party content and use it on your platform.

When SCORM was invented in the late 1990s, this interoperability was a radical idea. In the early 2000s, organizations around the world started delivering eLearning using SCORM-based platforms. Soon, it became the norm, leading to millions of courses that look like this:

This growing adoption of SCORM was a huge benefit for companies selling learning content–but it hasn’t actually made content migration any easier for L&D teams. That’s because SCORM can be notoriously buggy when importing and exporting content. Not only that–it’s expensive, too.

So, why is SCORM still so widespread?

According to Lead Analyst of independent firm Talented Learning John Leh, the early adoption of SCORM helps to explain why so many L&D leaders are still relying on it in 2021. Simply put, SCORM is everywhere.

“SCORM is ubiquitous in the industry,” says John. “Virtually all of the 1,000 or so Learning System vendors provide some level of support for SCORM, as well as the vast majority of authoring tools and content providers.”

So, that’s one reason. But what about the difficulties with using SCORM to track progress across multiple sources?

“The limitation of remote content has been solved,” says John. “Now, it’s possible for an LMS to launch and track SCORM content from multiple sources. It’s useful enough, even with its tracking limitations in comparison to xAPI.”

John’s overall verdict? Despite its faults, SCORM is here to stay. “SCORM is in use everywhere. I don’t see it going anywhere anytime soon.” 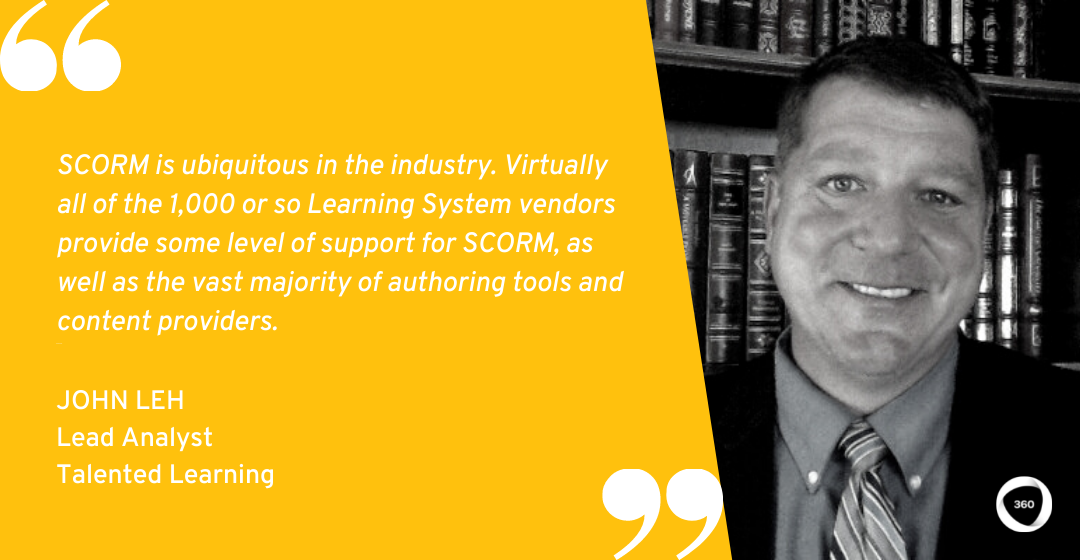 But if SCORM is so popular, why aren’t more employees asking for SCORM-based eLearning?

Peter Riber: ‘I haven’t produced an eLearning in 3 years’ 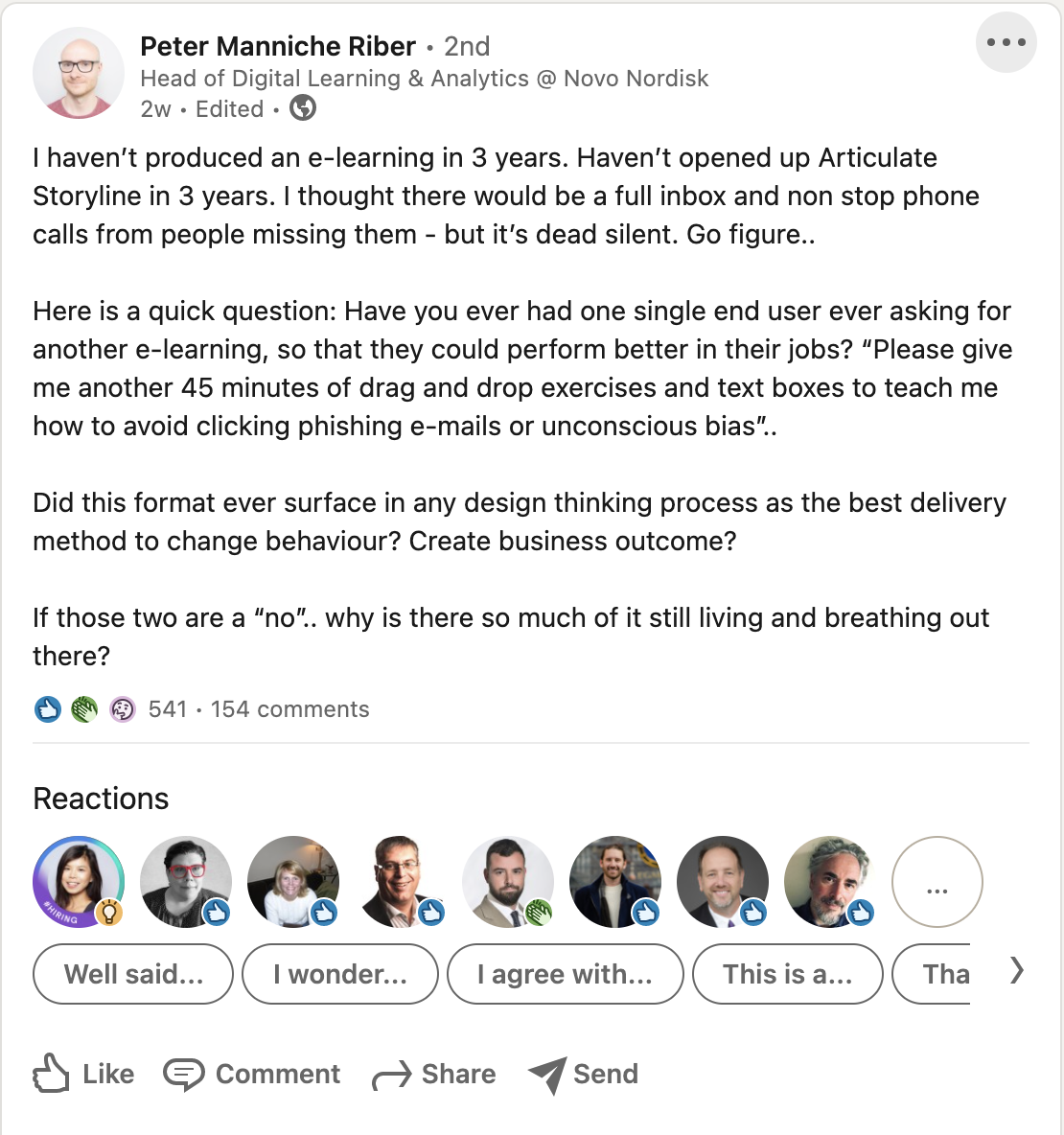 Of course, we have our own ideas and explanations for the lack of interest Peter talks about.

SCORM-based platforms like the one he mentions offer limited interactivity for learners. They turn training into a passive top-down experience, which doesn’t match up with the expectations today’s learners have for social learning. More and more, people want to learn from each other. More than that, they want to have a real say in what they’re learning.

In short, people want Collaborative Learning–but instead, the widespread use of SCORM as the default eLearning format is getting in the way.

But according to another L&D expert, while SCORM may not be perfect, it still has its uses.

Craig Weiss: ‘Nothing is perfect’

Craig Weiss, CEO and Founder of The Craig Weiss Group and FindAnLMS, shares John’s perspective on the question of why so many people are resigned to SCORM.

“SCORM isn’t going away anytime soon,” says Craig. “Does it benefit everyone, or achieve ideal results? No. Does it work well with mobile? No, which is why xAPI came into play. But SCORM is widely used. The majority of vendors in the learning system space have it, and many are using SCORM exclusively.”

As Craig explains, this ongoing reliance on SCORM reflects the realities of L&D today. “Consumers do not know all the nuances of SCORM, and honestly, they don’t care. They simply ask the vendor if they offer SCORM. If the vendor says yes, that is good enough for them.”

But what about the downsides of SCORM? What about how tough it is to update courses to reflect learner feedback, market developments, and new information?

“Nothing is perfect,” says Craig. “SCORM 3rd edition in 2004 was supposed to be ‘it’, but again, not every vendor jumped on board. Many declined because they said it was too difficult to implement. But SCORM remains. I see nothing wrong with that.”

“There is no perfect standard, and no one standard. It should remain that way.” 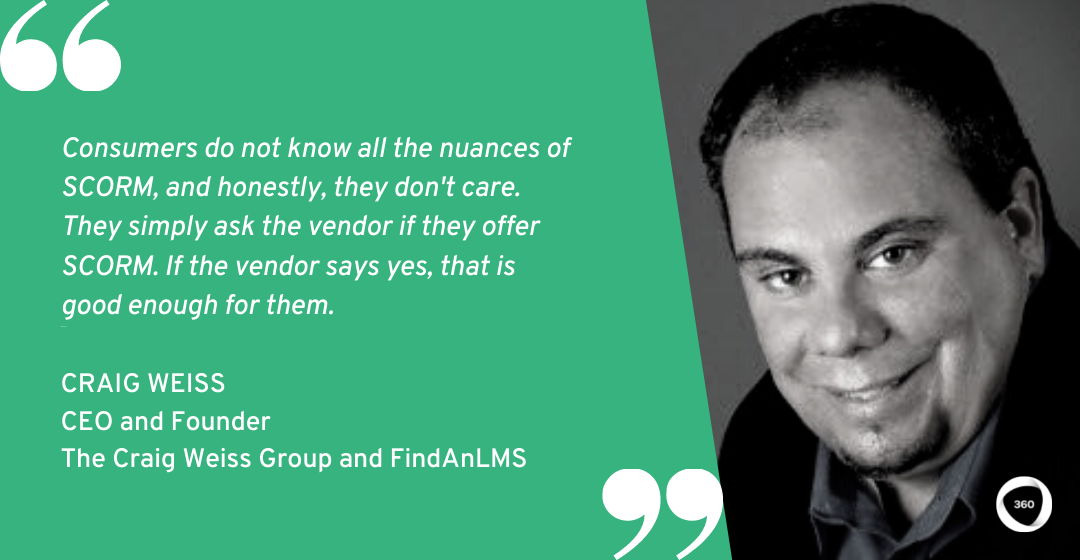 As other experts point out, our problem with SCORM isn’t just the platform itself–it’s also the learning mindset some L&D leaders bring with them.

Laura Overton: ‘We need to focus on supporting business outcomes’

Like John and Craig, Emerging Stronger Co-Creator Laura Overton has a fascinating perspective on SCORM. As she sees it, our SCORM reliance is part of a wider problem: letting platforms and standards shape business outcomes, rather than the other way around.

“Personally, I believe there is a preoccupation with standards that comes from a control mindset,” says Laura. “Historically, there was a danger that standards were driving L&D behavior. Everything in my DNA and in my research points to the fact that we need to focus first on supporting the business outcomes of L&D, and then on choosing standards and platforms to help us achieve these outcomes. If SCORM or any other standard can do that, then bring it on.”

So, does Laura think SCORM is up to the task of helping L&D leaders drive better business outcomes? She’s not so sure. “In my 30 years, I haven’t seen a tech application that proactively drives outcomes. The best they’ve achieved is tracking engagements and usage.” 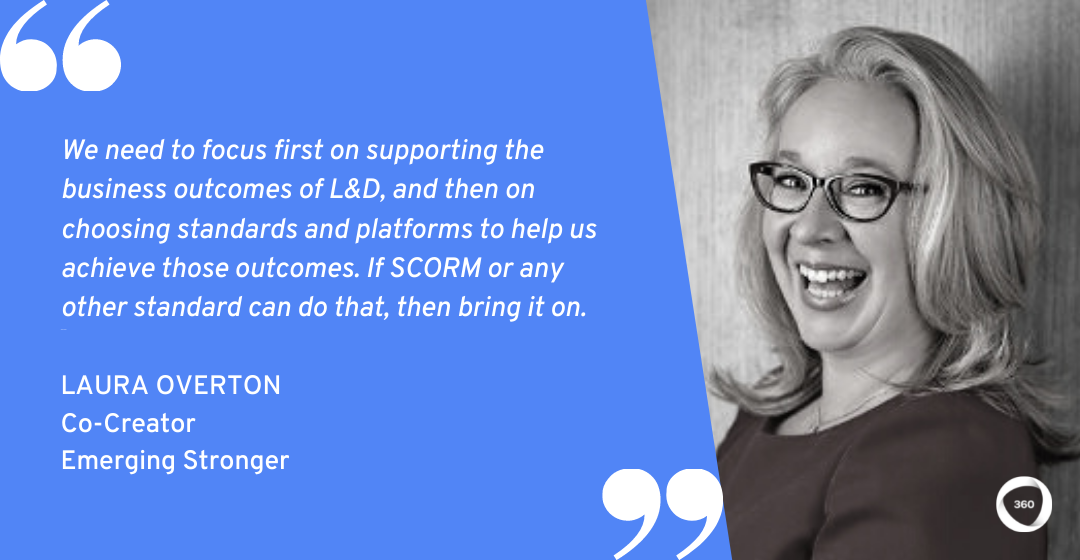 Alongside these trends, our experts also point to a broader issue: unrealistic expectations.

Christopher Lind: ‘Stop looking for SCORM to solve all your problems’

According to Christopher Lind, Chief Learning Officer at ChenMed, the real reason so many people are struggling with SCORM isn’t down to the platform itself. Instead, it’s a question of using SCORM in the right way, and calibrating our expectations.

“Here’s my take: I’m personally neither for nor against SCORM,” says Christopher. “It’s about better understanding the problem you’re trying to solve.”

“SCORM is good at accomplishing what it was intended to do, which is to communicate a specific set of information back to a platform about a digital learning module. In the right context, it’s fantastic for that.”

So, what’s the big problem? For Christopher, it all comes down to a question of user intention. “Where things go south is when people see SCORM as the be-all solution. It was not designed to natively provide the kind of comprehensive data people often expect it to. However, there are alternatives if you’re trying to solve a different kind of problem.”

And just like John and Craig, Christopher doesn’t see SCORM going anywhere anytime soon. “I anticipate SCORM will stick around, just like the LMS, because it solves an important problem. Where I think there’s a greater opportunity is for practitioners to better understand the possibilities, and stop looking for SCORM to solve all their problems.” 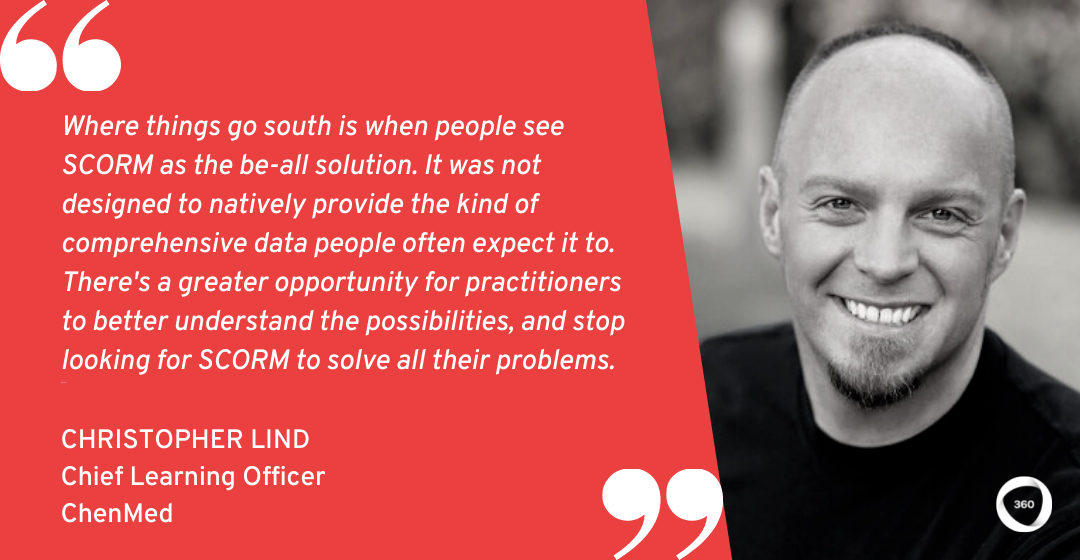 What do you think about SCORM?

To summarize, our expert panel is a little more balanced on SCORM than we are. While they might recognize SCORM’s limitations, including its top-down design, its limited data transmission, and its lack of mobile integration, they still see SCORM as a useful and popular tool. And more to the point, the panel doesn’t see how a better option could replace SCORM.

Unsurprisingly, we take a different view.

From where we stand, it seems a lot of people in the L&D world put up with SCORM purely out of habit. It’s understandable–after all, some organizations have invested thousands (or even millions) in creating dedicated libraries of SCORM-based courses, and they’ve spent a lot of time and energy developing training programs based on this content. 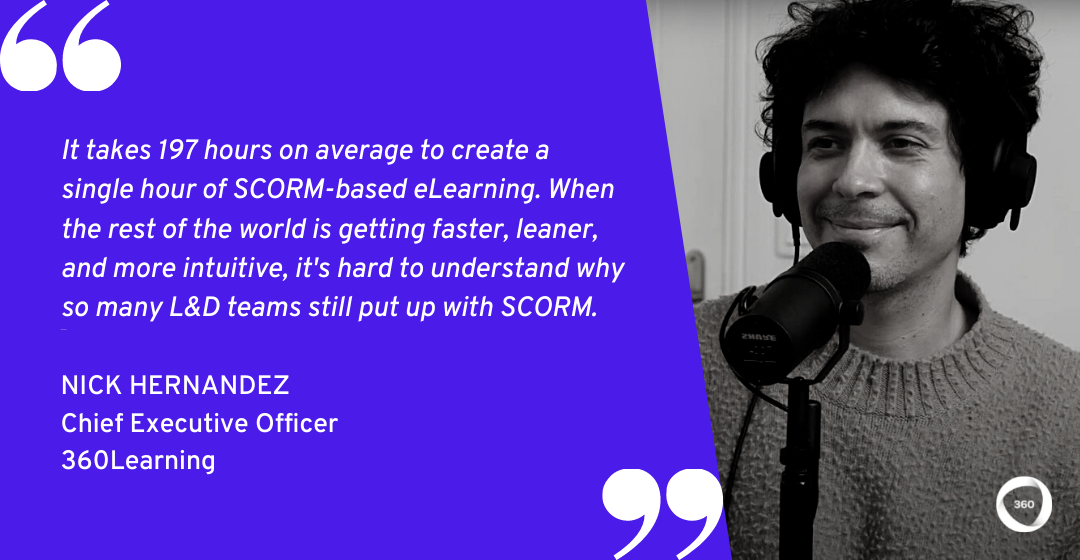 But even though L&D leaders might be used to SCORM, we think they deserve something better. So, is it time we all moved on from SCORM? We’d love to hear what you have to say, so be sure to join the debate on LinkedIn and let us know.

You didn’t choose SCORM–but now, you can choose something better

If you’d like to read more about how SCORM is slowing us down–and what you can do about it–then be sure to check out our ebook.

And don’t forget: you don’t have to say goodbye to any of your existing content, because 360Learning integrates with SCORM.